Baking potatoes is something that we all do as a simple and delicious way to serve a potato side dish. But what about adding a bit more to them and making them into something even tastier? With this twice baked potatoes recipe, you can upgrade your baked potatoes into an even better dish

What Kind of Potatoes Should I Use?

You may keep the insides fluffy by combining sour cream and cheese with hot mashed potatoes. If you combine them cold, the mixture will become gooey. Instead of a potato masher, you may use a hand mixer for maximum fluffiness.

Can I Make Them Ahead of Time?

Whether you're throwing a big celebration, such as a holiday party or a Super Bowl bash, you'll want to make as many preparations as possible in advance. You'll be able to truly enjoy yourself on the day off! These may be prepared ahead of time and kept in the refrigerator until ready to cook and serve.

Follow the recipe but stop at the point of adding the extra toppings and baking the second time. Instead, cover the baking sheet with plastic wrap once it is cool.

When it's time to bake, remove the plastic wrap and add more cheese and chives. Bake frozen potatoes at 400°F for 45 minutes, or until they're heated through and the cheese is melted. Broil for a few minutes at the end if necessary.

What you need to make twice baked potatoes

Preheat the oven to 400°F. Prick the potato skins several times with a fork and bake for about 45 minutes, or until cooked through. Let cool slightly before cutting the potatoes in half lengthwise.

Remove the potatoes from the shell, scoop out the potato flesh into a medium mixing bowl, leaving about ¼-inch of thick shell.

Add the butter, sour cream, chives, salt, and pepper and mix until smooth.

Fill the potato shells with the mixture.

On a baking sheet, arrange them. Season the tops with extra chives and cheese.

Bake at 400°F until the cheese and potato starts to brown and they are heated through, usually about 25 minutes. Serve while still warm.

Put them in an airtight container and store them in the fridge for up to three days. Make sure the potatoes are completely cooled before you store them, otherwise the condensation will gather on the inside of the container and make them soggy.

To reheat, you can put it in the microwave for 1 to 2 minutes or broil in the oven until the cheese is melted. The microwave method is quick, but it won't have quite the same consistency. The oven method takes longer, but gives you a better consistency, especially on the skins.

There are lots of alternative toppings you can add to the potatoes alongside or in place of the cheese and chives.  A few popular ideas include:

Why do my Twice Baked Potatoes have a gummy texture?

Use russet potatoes as your base. Red and Yukon Gold potatoes are waxier, so they won't give you the same light fluffy texture that a Russet will.

Do not wrap the potatoes in aluminum foil. Simply put them on a baking sheet and bake them that way. The moisture is trapped when the potatoes are wrapped, making them moist and gummy.

Lastly, make sure you have your fillings ready to go into the potato mixture as the potatoes will be hot and airy when they are first out of the oven and this is the best time to mix everything together. 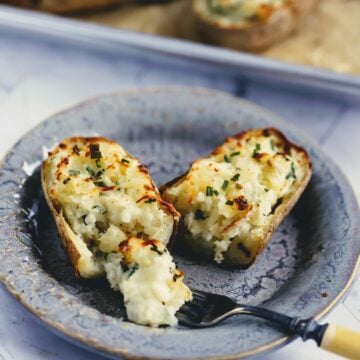