Stuffed Eggplant Parmesan is a delicious, hearty dish that's quick and easy to prepare. It has the same soul-satisfying flavor and texture as the baked version, but it takes considerably less time to make.
I adore baked eggplant parmesan, but creating it from scratch entails a lot of work. Salting and frying the eggplant slices, making the marinara sauce then forming the layers is all fine if you have some time on your hands, but until you're yearning for all of those yummy tastes once more, this stuffed version will do just fine!

Do you peel eggplant before cooking?

I'm frequently asked if the skin is edible, and the answer is a resounding yes! But if it’s an extra-large eggplant, which could likely mean it’s older and therefore has tougher skin, it’s a smart idea to peel it. But small, young eggplant, or the long this Asian (sometimes called Japanese or Chinese) varieties have thin, tender skins that add great texture to the vegetable when cooked. And the skins are also nutrient dense.

If you do want to peel the eggplant before making the recipe, you could use a vegetable peeler or a sharp knife. Make sure the thickness of the shell inside is a little bigger though if you peel the eggplant to make sure it is sturdy enough to retain shape while being stuffed.

What is marinara sauce?

Marinara sauce is a tomato-based sauce that is typically made with garlic, onions, and olive oil. It can be used as a pasta sauce or as a topping for pizza. Some variations also include herbs such as basil or parsley.

You can buy it in the store as a quick and simple way to make recipes such as this one or make it from scratch if you have a bit more time.

What you need to make Stuffed Eggplant Parmesan

Cut the eggplant in half lengthwise. Using a paring knife, carefully cut around each half's insides leaving a ¼-inch border. Using a spoon, scoop out the flesh. Chop the flesh coarsely and set it aside.

Brush the eggplant shells inside with around a tablespoon of oil and season with salt and pepper. Put the cut side up shells on a baking tray lined with parchment paper and roast in the oven until tender when you press the tip of a paring knife into them. This usually takes about 20 minutes.

Meanwhile, heat 2 Tbs. oil in a large saucepan over medium heat until shimmering. Add the onion and sauté for 5 minutes, stirring occasionally. Stir in the chopped eggplant, garlic, and salt and pepper until golden brown and cooked through, 10 minutes.

Mix in one cup of the marinara sauce and heat up, usually 2 minutes then remove from the heat. Stir in 1 cup of mozzarella, ¼ cup of Parmesan, basil, and pine nuts.

In a small mixing dish, combine the breadcrumbs, remaining 2 Tbs. Parmesan, and the remaining 1 Tbs. oil; set aside.

Broil the dish, 8-10 inches from the heat source, until the cheese is bubbling and the breadcrumbs have browned. It usually takes 4-5 minutes to heat all the way through.

Serve hot, spooning the sauce over the eggplant. Finish with the rest of the shredded basil.

If you have leftovers, warm them in the microwave in a dish that is safe for microwave use or in the oven. Cover the dish with tinfoil and bake until ready.

You can use different types of breadcrumbs in place of the Panko ones but I always find they give the best crunchiness and also brown nicely.

In place of the mozzarella, you could use any cheese that melts well. Something like Monterey Jack is always a good substitute or you could even try some cheddar. 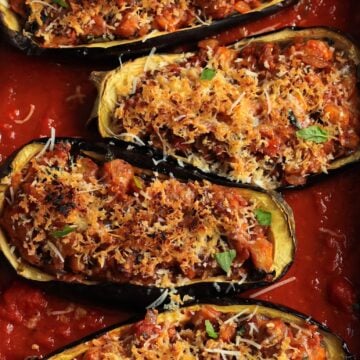 Kathy Kingsley
This recipe for Stuffed Eggplant Parmesan is much simpler and faster to make than the traditional baked version, delivering the same soul-satisfying flavor and texture in a fraction of the time. I love baked eggplant parmesan, but to be honest, making it from scratch is pretty involved—homemade marinara, salting and frying the eggplant slices, making the layers. It's all good if you have some time on your hands, but when you don't yet still crave all those delicious flavors, this stuffed version is just the ticket!
5 from 5 votes
Print Recipe Pin Recipe
Prep Time 20 mins
Cook Time 25 mins
Total Time 45 mins
Course vegetables
Cuisine Italian-American
Servings 4 servings
Calories 329 kcal