You can't beat these cheesy chicken quesadillas for an easy dinner that everyone will devour. Sizzling spicy chicken and peppers paired with gooey cheese is a win-win combination, but don't stop here. Once you start making this recipe, there’s so many ways you can change it for whatever you have in the kitchen!

Can you use corn tortillas instead of flour tortillas for quesadillas?

You can, but it will make a difference to the taste and texture. Flour tortillas are soft and pliable, so are easy to use, plus they are readily available in large sizes. Their mild flavor makes them a good match with just about any ingredients. Corn tortillas are a good alternative, but they typically are sold in 6-inch rounds, so kind of small for tortillas and they won’t have the same "softness" as flour tortillas do. Recently I’ve seen tortillas on the market that are a blend of flour and corn, so they may be a good alternative.

What is the difference between fajitas and quesadillas?

They're not the same. Fajitas are made on a skillet or griddle with protein and vegetables, after which they're combined in a tortilla to eat. Quesadillas, on the other hand, are prepared by layering all of the components together in the tortilla before grilling them.

Quesadillas aren't exactly a new invention, as they appear to have started in the 16th century. The word quesadilla comes from the Spanish term for "small cheesy thing."

What's the best cheese for quesadillas?

The best cheese for quesadillas is one that melts well and has a pleasant flavor. I've discovered that using more than one variety of cheese produces the most delicious quesadillas.

Monterey Jack, Colby Jack, and mozzarella are excellent melting cheeses since they do so readily. Cheddar has a wonderful taste but becomes too greasy when eaten alone. Pepper Jack is a favorite of many people, but it's also quite spicy. If you're looking to combine two different kinds of cheese, use half cheddar and mozzarella.

But if you want the real deal for quesadillas, I suggest queso asadero or oaxaca cheese, both of which are more authentic options and have a nice flavor and melting quality.

What you need to make cheesy chicken quesadillas

In a small mixing dish, combine the chili powder, cumin, and oregano. Season both sides of the chicken with salt, pepper, and the spice blend.

Over medium-high heat, warm 1 Tbs. of the oil in a medium saucepan. Add the chicken and cook until just cooked through, 2 to 3 minutes per side. Cut the chicken into cubes after resting for 5 minutes.

In the skillet, heat the remaining 1 Tbs. oil over medium-high heat. Add the onions and peppers and cook, stirring often, until softened, 3 to 4 minutes. Remove from the pan and set aside.

1 Tbs. butter should be heated in a separate pan or griddle over medium heat. Place a flour tortilla in the skillet, top with grated cheese, some of the chicken pieces and cooked pepper mixture, and another tortilla.

When the tortilla is golden on one side, carefully flip it over with another half tablespoon of butter, adding it to the skillet at the same time. Continue cooking until both sides of the quesadilla are golden. Repeat with the remaining tortillas and fillings.

Serve with salsa, guacamole, and sour cream if desired. Serve the quesadillas as is or cut them into wedges.

To keep quesadillas if you have leftovers, store them in an airtight container in the refrigerator for up to four days.

To reheat it and keep the outside crispy, use a non-stick pan over medium heat. Place the quesadilla in the pan when it is hot. Heat for 1-2 minutes on each side until the cheese has melted and the tortilla is crisp once more.

Freeze for later: Follow the procedure as directed. After heating the quesadilla in the microwave, transfer it to a cookie sheet and flash freeze until solid. Freeze for up to two months in an airtight container.

To reheat, wrap the quesadilla in a paper towel and microwave for 1-2 minutes. Remove from the heat and transfer to a nonstick pan over medium heat until the cheese is melted and crispy on the tortilla.

Assemble the quesadillas up to a day ahead and cook just before serving, or cook them a few hours ahead and reheat (wrapped in foil) in a 350°F over for 10 minutes.

You can also use shredded or rotisserie chicken for this recipe. 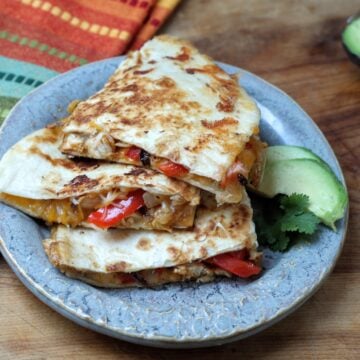 Kathy Kingsley
You can't beat these cheesy chicken quesadillas for an easy dinner that everyone will devour. Sizzling spicy chicken and peppers paired with gooey cheese is a win-win combination, but don't stop here. There are a myriad of ingredients you can use for fillings, such as sliced steak (flank or skirt), pork tenderloin, black beans, spinach, mushrooms, pepperjack chese—the variations are endless!
No ratings yet
Print Recipe Pin Recipe
Prep Time 15 mins
Cook Time 15 mins
Total Time 30 mins
Course dinner
Cuisine Mexican
Servings 6
Calories 230 kcal

Assemble the quesadillas up to a day ahead and cook just before serving, or cook them a few hours ahead and reheat (wrapped in foil) in a 350°F over for 10 minutes. Try these other easy dinner favorites:
Easy Crispy Chicken Parmesan
Sheet Pan Gnocchi with Vegetables
Garlicky Shrimp Scampi with Pasta